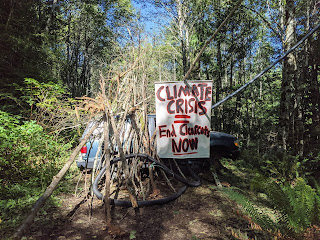 The Capitol State Forest, WA
Forest Defenders today have launched a blockade to prevent the clear-cut logging of a 100-year-old forest west of Olympia on the traditional territory of the Chehalis people. The forest, part of the critically endangered Puget Lowland Eco-Region, was auctioned off by the Department of Natural Resources as the “Chameleon Timber Sale” to the Elma based Murphy's Logging Company. Protesters have set up a blockade preventing road building and logging in one of the largest and most biodiverse units of the timber sale. The site is home to a late-successional Douglas Fir forest (over 100 years since it was last logged), which is gaining old growth characteristics that support endangered wildlife.
"It's absurd,” one protester said, "That the state of Washington under the leadership of the ‘climate change candidate’ Jay Inslee is still sanctioning clearcut logging on public lands.” Recent fires have been testament to the northwest’s vulnerability to the climate crisis, yet our elected officials are carrying on a business-as-usual approach as the world burns. Older forests such as those targeted by the timber industry not only store massive amounts of carbon and support tremendous biodiversity, but are less prone to wildfire and are more resilient to climate change.
“Not only are we in a climate crisis but we are in an ecological crisis, with more species going extinct today than at any point in millions of years. Every wild place that we can save today, every species we save from extinction will quite literally shape the future of life on earth for millions of years.”
In light of the ongoing climate emergency and ecological apocalypse, protesters are demanding:
An end to industrial logging on public lands in the State of Washington.
A complete ban on clear-cut logging in the State of Washington.
The return of “Capitol Forest” to the Chehalis and Quinault peoples, for DNR to completely fund the restoration of that area, and for DNR to return all stolen lands.
Until these demands are met and the Chameleon timber sale is canceled, protesters will maintain and expand the blockade to prevent industrial clear cutting on public lands.
Contact:
Joshua Wright – jawrighter@gmail.com 360-989-8076
Chameleon Blockade – chameleonblockade@protonmail.com 360-209-6426 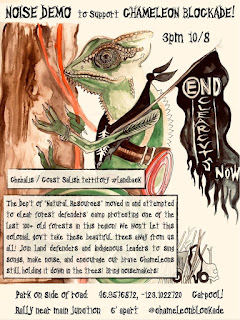 Early Wednesday afternoon, a convoy of trucks from at least four different law enforcement agencies parked on a logging road for an unannounced raid on a camp of forest protection activists, sweeping the camp away and leaving one man in the forest canopy tied to a contraption that continues to impede work on the controversial “Chameleon” timber sale. The officers came from the Thurston County Sheriff’s Office, the Washington State Patrol, the state Fish and Game Department, and the Washington State Department of Natural Resources (DNR), the agency which planned and sold the timber sale and manages all of the Capitol State Forest. Law enforcement temporarily closed the roads to through traffic while they cleared the activists from the camp. Ian Frederick, 29, a teacher from Olympia, was on the ground making coffee when the cops arrived. “There were just so many of them,” he said. “It seems like a lot of force to bring to deal with two unarmed civilians eating lunch.” The two activist
Read more 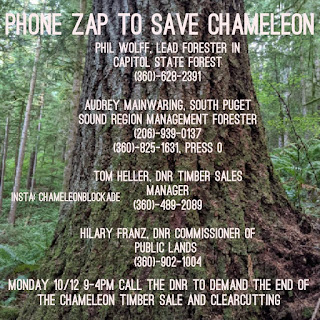 On October 7th, law enforcement raided the blockade and tree-sitter support camp and taped off the area, threatening criminal trespassing charges for anyone who approaches the tree. Over the last four days, the tree-sitter has been surveilled by law enforcement 24/7 with flood lights shining on the tree throughout the night, preventing the delivery of supplies or visits from the public despite risk of hypothermia in cold and wet weather. Please show your solidarity by participating in the phone zap! Here is a script. MONDAY, OCT. 12TH, 9AM-4PM CHAMELEON BLOCKADE PHONE ZAP: Demand that the Department of Natural Resources cancel its plan to clear-cut a biodiverse native forest, and end the police siege of the tree sitter! Call every number 1x, 2x, 10x, or 100x!   "Hello _________, I am calling in support of the Chameleon Blockade in Capitol State Forest. I condemn your decision to continue a police siege of the tree sitter, denying him access to survival supplies and communication
Read more
Follow @chameleonblockade